Meet the second edition competition winners, Julia and Oliwia, and learn what they thought about the Cambridge cLASs application process.

We are looking forward to welcoming them to Cambridge this spring!

My name is Julia and I’m an IB-MYP student at Liceum Ogólnokształcące no 5 in Wrocław. I like to spend my free time learning languages, doing sports – preferably running or climbing; lately, I’ve been also quite involved in voluntary work and participation in the Destination Imagination Creativity Contest. I’m interested in politics and current international affairs, and one day I hope to become an advocate for human rights, especially those of women and the LGBT+ community.

I stumbled upon the Cambridge cLASs contest in my search for scholarships to schools abroad. When I found out that I had gotten into the second stage, I focused mainly on getting to know my application even better and researching LAS as much as I could.

During my first interview, as I expected, I was asked mostly about the things that I wrote in my application. They were questions to help the judging panel get a feel of my way of expressing myself and my opinions, as well as verify what I wrote in the application and whether I can hold my own in a discussion, especially with tricky questions. There was also a task to read an infographic and answer some questions, and that was the part that made me work the most, not only because the topic was fairly new to me, but also because of the numerous statistics and facts I had to read and process in a very short time. Nevertheless, I walked out of the interview satisfied with my answers and when I found myself among the final five finalists, I was both excited and nervous at the same time; still, I walked into the interviewing room hopeful and with a very positive attitude.

The last stage was a bit longer and the committee focused more on details about me, my ability to develop arguments and react quickly. I was showered with an overwhelming amount of questions – but that was partially the goal, so I just answered everything true to my instincts and what came first to my mind. Some of the topics were really challenging or unexpected – my personal worst was a question about my favourite English idiom and where it could have come from. Some of the random questions – like what would be written in the middle of my autobiography at 90 years old – gave a wonderful opportunity to showcase my passions and goals. At the end of the interview my brain felt drained, but when I found out the results, the feeling was overshadowed by immense joy and excitement for what’s to come.

I am a 16-year-old extrovert living in Szczecin, attending the pre-IB class in II Liceum Ogólnokształcące im. Mieszka I. Learning languages and reading all sorts of published pieces of writing consume most of my almost non-existent free time. Memorising seemingly useless facts about historical events along with travelling, especially by plane, also hold a special place in my heart.
Throughout my life, I’ve probably gone through every possible phase when it comes to a potential career – I wanted to be an actress, a doctor, a pilot, a lecturer, a writer, an archeologist… Having sorted out my priorities, understanding the human psyche is what I want to achieve – maybe as a linguist, maybe as a psychologist or maybe as a cognitive scientist. Perhaps then I’d finally discover why I am so addicted to the Broadway musical “Alexander Hamilton”. 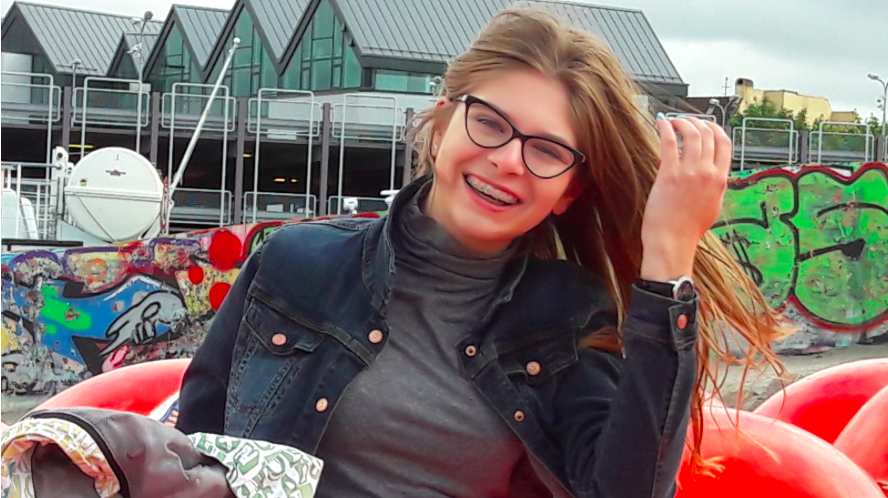 The application for Cambridge cLASs required me to produce seven pieces of writing on given topics, simultaneously making me think about who I actually want to become. I sent the form five minutes before the deadline, almost giving my mom a heart attack, and didn’t give it much thought afterwards.

Honestly, I didn’t prepare much – although I tried to look up as many interview tips and questions as possible. In the end, those didn’t come in handy as much as one would expect them to, as most of what the jury wanted to know was based on my essays, which I had read thoroughly before the interviews. What helped me the most was the support of my family and friends together with my English tutorials.

The whole day was full of pleasant surprises. On entering the waiting space, I met other participants who simply couldn’t be nicer and conversations with them eased the pressure inside me. I felt at home immediately. I still can’t recall my first interview fully – those 15 minutes assigned to each of the candidates flew by in a blink of an eye!

When only five of us remained, it was a bit scary. After all, we were so close and at the same time so far away from achieving what we’d dreamt of. That common goal created an astonishing sense of community between us. At some point we simply wanted each one of us to win the scholarship.

During the second interview I was asked about my acting experience, as I had mentioned that in the application. In the last question (the one that I remember clearly) the jury presented me with a specific situation – I needed to imagine that I was 90 years old and had written an autobiography. They inquired about what was inside.

Despite the pleasant atmosphere, the stress of the whole day was getting hard on us. Finally, the jury emerged after a heated debate… and the rest is history.

What did I learn throughout the whole process? How to properly pronounce the name “Leysin”. But seriously though… Try, try, try. Be yourself. Be passionate about something. Think on your feet. And never throw away your shot!